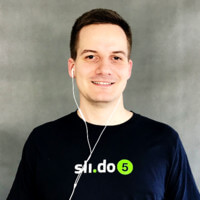 Stefan Chromik is a CTO at Slido. Stefan studied Applied Informatics and Managerial Informatics. During the studies he dived into the technical world. Mainly infrastructure – from dirty work at data centers to cloud solutions in AWS. He spent some years taking infrastructure on-call shifts with 4h SLA for a resolution. That’s what taught him to work under pressure. Then he became a father and then again, and very recently again – and that’s a completely new perspective on what a pressure is.

His scope at Slido was a roller coaster since the beginning in December 2015. Joined as a specialist for cloud solutions where he worked very closely with the development teams. Later took responsibility for security. Then, for some reason had to help with legal stuff and helped to build the fundamentals of Slido legal department. Later he worked closely with Slido success teams supporting technical, compliance and security perspectives of business contracts. In the free time, he was trying to keep Slido up and running until he managed to put together a stable DevOps infrastructure team.